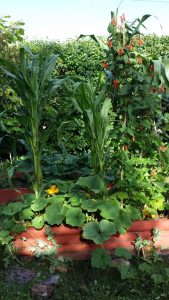 A Three Sisters garden is made up of corn, runner beans and squash or pumpkin, traditionally grown by the Haudenosaunee Confederacy, a sovereign people composed of five (later six) Indigenous nations in Ontario , Quebec and Northern New York. The beans give nitrogen to the soil for corn and pumpkins; the corn stalks support the beans, and the squash leaves provide ground cover that prevents weed growth and conserves moisture.

I’ve tried for three years to have a Three Sisters garden bed following the planting instructions in the Old Farmer’s Almanac.

The growing conditions this year have been excellent so far.

I planted the corn first – it is from Peru and grows very tall. However the beans quickly outstripped the corn and the squash lingered behind. Finally, the corn started to grow, and the beans started to twine around. I read that scarlet runner beans twine counter-clockwise and pole beans twine clockwise and it seems to be true in this case.  I also remember an elementary school reader from about sixty years ago that described how a whole fish was put into the planting mound to provide nutrients for the plants, but I didn’t have any fish to put in.  Tuna didn’t seem to be appropriate.

The Three Sisters won’t all come to maturity.  The Peruvian corn doesn’t get the right kind of light conditions – I think it needs solid twelve-hour days like it would get in Peru close to the equator,  and the hot growing conditions in the Okanagan will probably cause the scarlet runner beans to ripen too quickly.  The squash should be tasty.