Previous Next
Taking Refrigeration for Granted 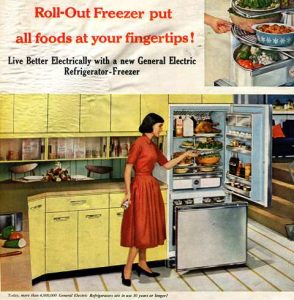 The current cold snap notwithstanding, we take refrigeration for granted these days. We expect  to have perishable produce available to us year round and keep fresh milk in the refrigerator for at least two weeks.

In the not-so-distant past refrigeration was out of reach for ordinary people. Up to the 19th Century, perishable or out-of-season food choices were pickled, dried or salted.  Milk had to be obtained daily. Root vegetables could be overwintered for a few months in root cellars. BC’s Aboriginal peoples knew about root cellars; Amelia Kinbasket (1882-1957) described one she built herself from her mother’s instructions:  “When finished it was a hole in the ground eleven or twelve feet deep, about 35 or 40 feet in circumference at the bottom but a narrow opening at the top.”[i]

The first move to preserve perishable foods by means other than drying or pickling came with the invention of canning in 1809 by Nicholas Appert to preserve food for Napoleon’s armies. It was a mystery why food cooked inside a sealed jar didn’t spoil until Louis Pasteur discovered microbes in the 1850s.

Snow and ice have long been used to keep food cool. The Chinese are credited with cutting and storing ice in 1000 BCE. [ii]  Wealthy people had early access to ice; their servants collected sheets of ice that were placed in salt, wrapped in strips of flannel and stored underground to keep frozen until summer. 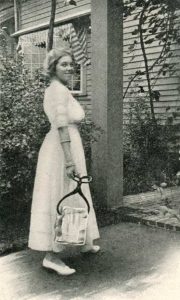 Ice became available to ordinary people when a patent for the first “ice box” was granted in 1802 to Thomas Moore, an American farmer who needed to transport butter from his farm to market. “He placed a tin chamber inside of a cedar box, and then lined the exterior of the box with rabbit fur to insulate it. When he needed to transport butter, he would fill the space between the wood and the inner tin chamber with ice, fill the chamber with butter and seal the box shut.” [iii] Later ice boxes were lined with tin or zinc and a drip tray that had to be emptied daily was used to collect the melt water. Ice delivery became an occupation.

The demand for ice increased. Frederic Tudor, a wealthy Boston businessman went into the ice harvesting business and became known as the “Ice King.”[iv] As soon as ice was strong and thick enough to support horses and equipment, the snow was repeatedly cleared away to create stackable, thick blocks. The ice fields were marked in squares and cut by hand with large-toothed one-man saws. Conveyor belts were used to drag the blocks into the ice houses. It was a very labour-intensive industry that worked well until the warm North American winter of 1889-90 when ice on the East Coast of the U.S. did not freeze hard enough (it was a very cold winter in the Pacific Northwest on the other hand). A great desire for cooling had developed; inventors began to seek other ways of refrigeration. A type of artificial ice was developed. Nothing however was as successful as the modern refrigerator. 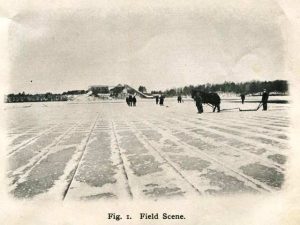 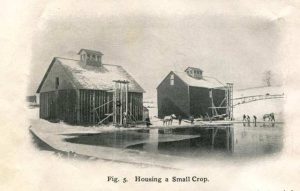 The principle by which modern refrigerators work is deceptively simple; the website “How stuff works” describes the process in one sentence: “When a liquid evaporates, it absorbs heat in the process. If you want to get rid of heat, you need to coax a liquid to convert to its gaseous state.” [v]

Benjamin Franklin had already investigated the temperature lowering properties of ether in 1758. He and chemist John Hadley were able to drop a thermometer’s temperature well below freezing by swabbing on ether and allowing it to evaporate. [vi]

The first refrigerator for home use was invented in 1913. It has made a radical change in people’s eating habits, from increased variety to fresh vegetables available year-round. We would have a very hard time returning to pre-refrigeration days.  The following photograph from a 1954 Canadian Journal Magazine purports to show the benefits of a particular brand of refrigerator: a nameless brand in the top plate; Admiral brand in the bottom plate. Competition knew no limits. 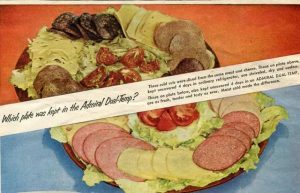 But what about energy consumption and climate change?  What will be the environmental effects as more people desire refrigeration whether for food or air-conditioning? How about the one-third of perishable food that is wasted because it is not refrigerated properly or used in a timely manner? The Energy Learning Journal, published by the European Energy Centre in collaboration with the UNEP provides scientific data and impetus to work for change in our use of refrigeration. [vii]  With the population of Planet Earth expected to reach 9 billion people by the year 2050, greater use of refrigeration would ensure better worldwide nutrition in both quantity and quality. Increased food wastage and negative environmental effects of refrigerants must be considered in any discussion of climate change.

The next time we gaze into our refrigerators and wonder,”What’s to eat”, we need to think about the effects of refrigeration as well as the benefits.

[vi] According to the Free Dictionary, “Ether is a volatile, highly flammable liquid, C4H10O, derived from distilling ethyl alcohol with sulfuric acid, used as a reagent and solvent, and formerly used as an anesthetic. Also called diethyl ether, ethyl ether.” http://www.thefreedictionary.com/ether. For information on the invention of the refrigerator, see: