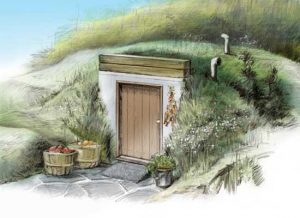 Root cellars have been around since the beginning of agriculture. The early settlers across Canada, including those here in BC. often did not have the option of a visiting a grocery store in the middle of winter for fresh fruits and vegetables. They often “shopped” in their root cellars. Before the advent of home refrigeration (see Taking Refrigeration for Granted) root cellars of various descriptions were the only source of fresh fruits and vegetable during the winter months and often right into spring. They were used to preserve vegetables, fruits, nuts and seeds.

Technically any type of storage that uses the natural cooling, insulating and humidifying properties of the earth can be called a root cellar.  So holes dug into the ground or into the side of a hill qualify. 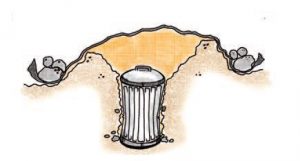 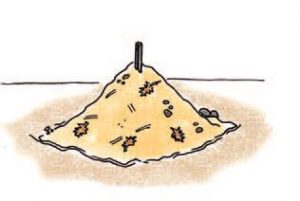 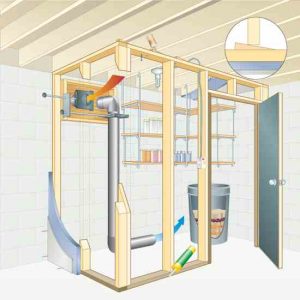 So do buried containers, covered mounds above the ground
or specially built cold rooms in the basement of houses.

Susan Musgrave of National Geographic calls root cellars vintage fridges[i]. They are designed to keep the temperature a degree or two above freezing. Ideally a temperature of 32º to 40º F and a humidity level of 85 to 95 percent are best. The cool temperatures slow the release of ethylene gas and stop the growth of microorganisms that cause decomposition. The humidity level prevents loss of moisture through high humidity prevents transpiration, or moisture loss, in root vegetables, thicker-skinned fruits and the withering look that goes along with it. In addition a ventilation system is integrated for fresh air intake and stale air exhaust but during the winter, the ventilation system often needs to be closed to keep the foods from freezing.

Typically root cellars are suited for the storage of root crops, thus the name. Potatoes, carrots, beets, turnips, rutabagas, winter radishes, kohlrabi and parsnips adapt well to this form of cold storage [although if you live where the winters are milder you might be able to just leave some of them in the ground if there is no danger of freezing]. Vegetables and fruits should not be stored too close together even though temperatures and moisture requirements are similar. Fruits such as apples and pears give off ethylene gas as they ripen and this decreases the storage life of vegetables. For example, ethylene may cause potatoes to sprout early.

Generally speaking, root crops like carrots, beets, turnips, parsnips and
potatoes keep the longest so about this time 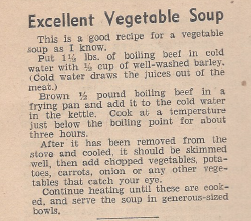 of year in a pioneer home hearty stews, soups, and pot roasts with root vegetables were standard fare.  Perhaps you’d find a recipe like this one from the Eat Wisely and Cheaply section of the Edith Adams Prize Winners 4th Annual Cook Book published by the Vancouver Sun  (circa 1937) written by Miss Nora H. Miles of Cranbrook who was a graduate of McGill University in Home Economics.

In 1999, research in the village of Elliston in Newfoundland documented 135 root cellars in the community.  A data base was created recording the location and aspects such as the construction date, the original and present owner, whether each cellar was active or not, the condition of the cellars, and whether any recent renovations had been made. The research indicated about 55 percent of the root cellars were over 100 years old and the oldest root cellar in the village dated back to 1839. In the year 2000, after restoring more than 40 root cellars, Elliston declared itself “The Root Cellar Capital of the World. The root cellars have become a tourist attraction bringing many visitors to the community each year[ii].  In an interview, Dale Jarvis, development officer of the Intangible Cultural Heritage of Newfoundland and Labrador, explained that root cellars store not only food but also traditional knowledge[iii].

I wonder if there are any communities in BC that might rival Elliston?

If you are interested in seeing a root cellar, according to Canada’s Historic Places[iv] there is one at the Historic Stewart farm, in Surrey BC and another at the Grist Mill at Keremeos but I imagine there are many others out there just waiting to be noticed.