In this post, I have summarized a review of Mobilize Food! Wartime Inspiration for Environmental Victory Today by Eleanor Boyle. A longer review appears in The BC Review of Books

In November, BC Food History Network blogs often include reflections on the implications of war years on food. We have posted on War and Post War Food; Food from Home on the War Front; Bulman’s Cannery; Meat Rationing during WWII; Apples and Patriotism;  and Canadian War Cake. 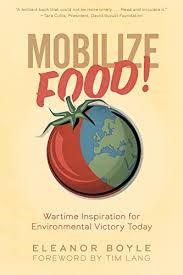 In Mobilize Food, BC journalist, teacher, and scientist, Eleanor Boyle argues that we should look to the past to inspire present and future food-related climate action.  She describes how Britain marshaled food resources during the Second World War. She weaves contemporary environmental data into history and presents a case for using wartime approaches to food to guide climate change.

The book is written in three parts. The first is a detailed history of how Britain mobilized to feed the country during World War II when imports were cut off and food shortages loomed. By creating a Ministry of Food and taking sweeping measures the government ensured that everyone had food to eat. The measures included mandating of growing home food gardens, increasing farm production, rationing scarce foods, developing feeding programs, and reducing food waste, to name just a few. Similar actions were taken in other countries as well. Canadians may remember Victory Gardens ration cards and tokens or victory gardens. However, the Canadian measures were not as stringent as those in Britain. Research conducted after the war in Britain found that by drastically changing the local food system and adding methods of sharing food, there was no malnutrition, and the unbelievable health benefits. “Citizens were physically stronger and less prone to disease than they had ever been. Diabetes mortality took a ‘conspicuous’ drop … heart disease and tuberculosis plummeted” (Boyle, p. 80).

Part two makes the connection between food production and climate crisis. Boyle outlines the reciprocal relationship between the two – climate change threatens food production and availability, and current forms of food production, marketing, distribution and consumption exacerbate climate change. Food is frequently taken for granted. Boyle cites endless studies such as a recent one that claims food systems are responsible for a third of global anthropogenic greenhouse gas emissions (p. 113).

Part three ends the book by reviewing wartime actions and outlining various ways to mobilize action today. The action steps will be familiar to people. They range from various forms of food governance, to enhancing local food systems, changing agricultural methods, and decreasing food waste, to individuals eating more seasonal, diverse, local and plant-rich foods.  It is inspiring to think adopting practices from the war years could improve our own health as well as the health of the planet.

See this link for the full review on BC Review of books.