3 sisters and cousin planting May 21

I’m thinking about garden seeds. Last year (2021) I set out to grow vegetables that might have been grown in a Hudson Bay Company post garden at the 53rd/54th parallel and above.  The growing season in Edmonton and area is short and intense, around 100 – 120 frost-free days (or less) between May 15 and September 15[i] and similar to Prince George (where I lived and gardened for a few years in the 1970s).

It might seem odd to write about Edmonton in a BC Food History blog. But once you are above the 53rd parallel, there are many similarities between Alberta and BC, in the interior and north. The Peace Country of Northern Alberta and BC knows no boundary. The Rockies don’t stop at the BC/Alberta border. Both provinces have strong Indigenous / First Nations presences and were influenced by the Hudson Bay Company and the fur trade.

In the early days, Europeans were highly dependent on the food-getting abilities of the First Nations / Indigenous peoples[ii]. In 1670 the Hudson Bay Company was founded and various forts and outposts were established along the rivers and lakes north and west of Thunder Bay. Garden seeds were valued; Indigenous peoples would trade furs for dried pea seeds[iii], and starving traders sometimes even ate the garden seeds to survive. Scurvy, caused by vitamin deficiency, took many lives. Some form of vegetables was greatly needed.

In 1820 the NorWest Company and HBC merged under the money-focused leadership of Sir George Simpson. He wanted to make profit for the shareholders and pushed the voyageurs to work extremely long, bone-wracking days.  They required 8,000 to 12,000 Calories per day, obtainable only from high-fat foods such as pemmican. There was no time to hunt and live off the land as the Indigenous peoples had done for thousands of years. For example, the prairie turnip was a valuable source of carbohydrates; but it took three years to mature and required knowledge held only by Indigenous peoples to harvest[iv] (1). As a result, the HBC promoted cold-tolerant vegetables with short growing seasons such as potatoes and cabbage. Some researchers have critically analyzed the introduction of European plants and defined it as horticultural imperialism, causing the decline of native plants by overtaking the natural plant systems[v].

A 1942 pamphlet is available on how to grow an HBC post garden. Among other points, it describes how to build a cold frame and lists the earliest planting dates for various hardy vegetables at northern posts. 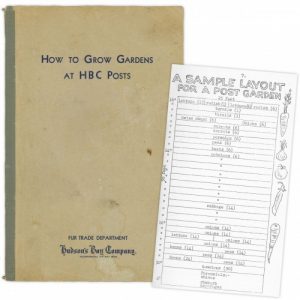 When I began researching plant varieties to grow in an HBC post garden,  The Grist Mill and Gardens  at Keremeos, BC, provided a sample HBC garden plan focused on 1860 plant varieties, based on research by retired agronomist Sharon Rempel. In her online publication, she has provided lists of additional vegetable varieties suitable for a heritage garden. http://www.grassrootsolutions.com/ 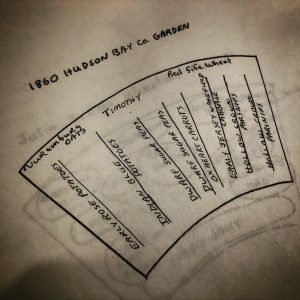 Here is a short summary of the four main types of seeds and plants[vi].
Open pollinated plants- are pollinated by nature (insect, bird, wind or animal).

Heirloom seeds – have been grown for 50 years or longer.  They will look like the parent plant so long as the flowers were pollinated by the same variety.  This means they grow true to type. All heirlooms are open pollinated, but not all open-pollinated plants are heirlooms.

Heritage seeds seem to be synonymous with heirloom.

Hybrid seed comes from open pollination between two specific varieties of plants. They might be selected for specific desirable characteristics, but seed saved from them will not grow true to type.

My 2021 pocket garden project at the Edmonton Urban Farm focused on vegetables with a short growing season..  Most HBC posts were considered to be subarctic conditions, suitable for potatoes, peas, cabbage and parsnips. After about 1840 rhubarb was mandated by HBC for its natural laxative and purgative qualities, or in other words, to stop constipation caused by an all-meat diet.  In 2020 I planted two types of rhubarb and they both came up in 2021. Borage and lovage also came up as volunteers from the year before. 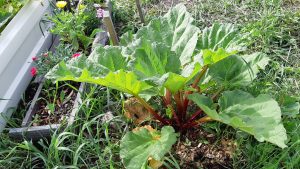 I grew two varieties of heirloom potatoes (Amarosa and Columba),  dwarf sugar snap peas, early Jersey Wakefield cabbage, and hollow crown parsnips.  I could not find oxheart carrots so I tried some Nantes-type carrots. With the remaining garden space I included a three sisters and one cousin structure of corn, beans, squashes and sunflowers.  I threw in some garlic, lovage, carrots and tomatoes, as well as eggplant for the sheer thrill of it.  Nothing grew very well, except the cabbages, which provided a lot of food for cabbage butterflies, and the parsnips.  Next year, who knows?

My favourite quote about gardening is from a 1970 Beaver article by Dr. Douglas Leechman, a noted historian. He catalogued many of the issues surrounding the pursuit of food security and sufficiency, and quoted the HBC Committee in 1682, written in a response to a query from a man named John Nixon who asked about successes and failures of gardening: “Let the event be what it will let it be done[vii].”

Or in other words, every time a gardener plants something is an experiment. Plants vary according to growing conditions; the gardener can only do so much, and enjoy the doing as much as the product.

[i] Many sources offer information on hardiness zones in Canada.  Here are two of many: The Farmers’ Almanac, or a seed company such as  https://www.veseys.com/ca/canada-hardiness-zones-frost-dates

[ii] BC First Nations / Indigenous peoples met their food needs for thousands of years before newcomers and settlers.  You can see a number of past BC history posts by searching  the Heritage and Indigenous Foods search category on the home page.

Cabbages and parsnips thrived in my 2021 garden. Here is some information about the varieties.