Cakes, crisps, crumbles, muffins, pies – tart and sour stalks of rhubarb have long provided a tangy, citrus-like food addition to plain, bare-bones diets. Rhubarb is the “pie plant” and as stated in previous blogs, the availability of sugar in the late 1700s increased its popularity.

But, rhubarb goes further than pie. Savory rhubarb has a lot to offer too. It’s a vegetable masquerading as a fruit, and can be used in place of ingredients such as carrots; tomatoes; and in ketchup and salsa mixtures. Here are a few points, followed by some savory and sweet rhubarb recipes.

First – Nutritionally, raw rhubarb can provide up to 10% of the daily requirements of Vitamin C and 30 % of Vitamin K (this last point may be of interest to people with blood clotting concerns). Its main value is its high fibre content, its purgative/laxative qualities, and its low-calorie count (see Health Benefits Times link for further details). Rhubarb was valuable in fur-trading and pioneer days for offsetting an all-meat diet.

Rhubarb growing in a back alley

Second – Rhubarb grows almost anywhere, and is seasonal in North America from May to about July. It turns up in surprising places;  tucked in beside a neighbour’s garage, or on a dusty alley poking through a fence.  You might be lucky to inherit a clump of rhubarb – if the centre has died out and there are a bunch of outlying plants, consider transplanting rhubarb crowns in the spring or fall. Rhubarb seeds are ready to harvest, according to Patricia Milligan, Northlands Agriculture Education coordinator, when the seeds have turned brown and fallen off the flower stalks into the centre crease of the leaves (in the fall). Then keep the seeds in a cool, dry environment and plant in the spring – but note hybrid seeds don’t always come true to the parent.

Third – Rhubarb has a strong Canadian component.  Amber Paquette, Historian Laureate for Edmonton, says that rhubarb is a hallmark Métis traditional food. Early European traders brought rhubarb crowns with them. Then the plant was brought across Canada by Hudson’s Bay Company employees (who were 80% Indigenous) and cultivated in gardens for each fort and outpost.  Homesteaders and pioneers also brought rhubarb crowns or seeds with them.

Métis red rhubarb is potentially a  variety of rhubarb that may be unique to areas such as homesteads along Alberta’s Athabasca Landing Trail.  In the gold-rush town of Barkerville, British Columbia, rhubarb plants grow with abandon on the slopes behind the Chinatown section. So far DNA analysis has not been done on culinary rhubarb to determine if there are distinct varieties other than by colour.  See previous BCFHN posts about rhubarb.

Rhubarb plants have spread along the slope in Barkerville 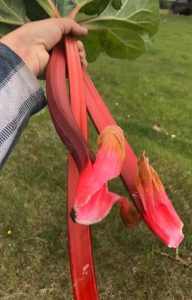 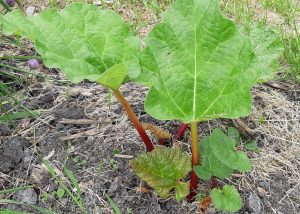 These stalks are too small to be harvested. 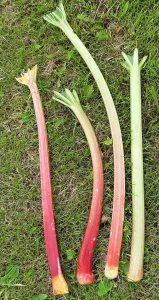 Fourth – red or green rhubarb stalks are equally nutritious. Runaway rhubarb is usually green with streaks of red -it’s supposed to be as sweet as all-red. If you are fortunate, someone will give you rhubarb, or you’ll be driving down a quiet road, and spy a rhubarb plant in the ditch. Never remove stalks from first-year plants, pull out the stalks rather than cutting them, and pick judiciously until the plant is well established, always leave at least half of the plant, and only pick ones that are 20 cm. or more in length.

Savory Rhubarb – here are five ways with rhubarb from the Smithsonian Magazine (check out the recipes and suggestions, they are creative and interesting).

Finally, here are a few recipes from some of my favorite old-time cookbooks:  Savory rhubarb or sweet, it’s all good. 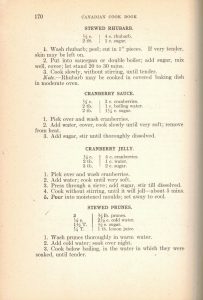 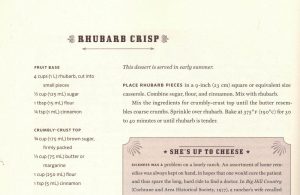 hubarb Crisp recipe from “Come ‘n’ Get it – Roundup Recipes from Ranch Country” by B. Barss 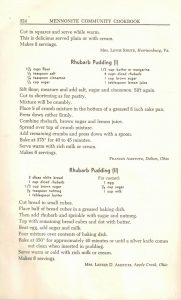 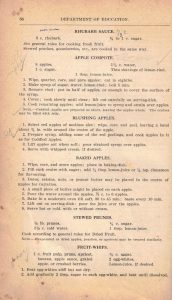 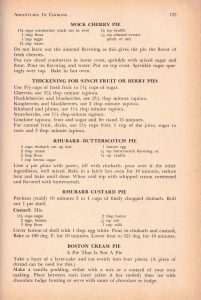