Food will win the war and write the peace

Previous Next
Food will win the war and write the peace

November 11, 2018 is the 100th anniversary of the signing of the Armistice that ended World War I (more properly known as the Great War until it was superseded by WW II).

Over the past two years the BC Food History Network has featured several articles concerned with wartime food. There were two broad categories of food conservation; saving protein-and-calorie rich foods such as butter, cheese, milk and eggs for the soldiers, and reducing costly imports such as sugar, tea and coffee. The use of local produce was also emphasized.

Canadian war cake[i] provided several recipes for cakes without butter, milk or eggs. The cakes could be sent to troops in the trenches, or eaten as a treat at home. Raisins substituted for some of the sugar.  The recipe featured in this blog could date as far back as the Boer War (1899-1902). 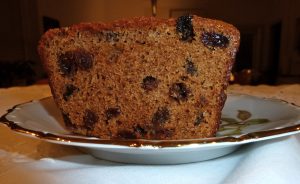 Apples and patriotism[ii] linked eating local fruits with winning the war – and was likely a bonus to Okanagan apple-growers as well.

Meat-rationing[iii] was important in World War II (rationing did not exist in the First World War). The discovery of a WW II meat ration token in a button box led to this exploration of the topic. 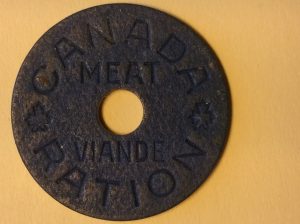 Food dehydration[iv] was an excellent way to use up excess produce and ensure that the forces were well-nourished. Bulmans Cannery in Vernon, BC became one of Canada’s leading producers of dehydrated food in WW II.  A bumper crop of summer cabbages in 1944 resulted in the biggest dehydration project that Bulmans had undertaken. The plant employed 215 people to handle 100 tons of cabbage daily. The local newspaper reported a “double-barreled compliment” received from the husband of one of their employees deployed in Italy: “Bulmans cabbage is sure swell; but we wouldn’t mind if the machinery broke down for we see nothing else”.[v]

As Alice Stevens[vi], a Vernon, BC home economist told the Vernon Rotary Club, “Food will win the war and write the peace”.[vii]

To honour past hard times, and future peace, why not try a war-time recipe?