Pemberton potatoes are virus-free. The geographic isolation of the Pemberton Valley, one hour north of Whistler, has made it a world-wide source of virus-free seed potatoes that will protect future generations from potato famines such as the Irish Hunger Famine of the 1840s. The blight that destroyed crops overnight and caused at least one million people to starve to death (and another two million to leave Ireland) was spread by a virus.

Potatoes came to Fort Langley, BC in 1827 with the Hudson Bay Company.  Potatoes had been grown in the Andean Mountains of South America for at least 4,000 years and at least 5,000 varieties have been determined. (Note: for a theory about how potatoes came to BC even before the HBC, see this recent post: https://bcfoodhistory.ca/haida-potatoes/ 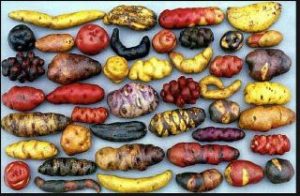 The Spanish conquistadors brought potatoes from South America to Europe in the 1500s. At first the European peasants were suspicious of this new crop. In 1770 Antoine-Augustin Parmentier  had a fence built around a supposedly top-secret potato plot at the Palace of Versailles.  People were so curious that they raided the field and planted the potatoes they found.  The crop  kept the family food supply safe from marauding armies because the tubers grew underground.

A family could live on potatoes if required. Although all the green parts are poisonous, the tubers provide  carbohydrate, protein, and potassium as well as Vitamins C and B6 and some trace nutrients.  Only Vitamin D is missing, and that can be obtained from sunshine. The renowned Smithsonian Institute claims that potatoes “changed the world” by preventing famines that had crippled Europe.

The Lil’wat Nation quickly adopted potatoes as a ready food source, probably before the Cariboo Gold Rush of the 1860s. Potato cultivation fit readily into the Lil’wat gardening/food gathering practices because the women already planted and dug up bitterroot and other root-type plants (Suttles, 1954). 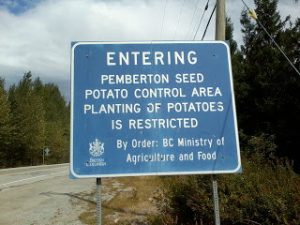 The Pemberton Valley is isolated from other potato-growing areas and provided ideal growing conditions for potatoes. It was perfect for creating a virus-free potato zone.  In 1945 Pemberton was designated a Seed Potato Control Zone and by 1965 it was certified as a Potato Virus Free Station. Since then, no outside seed potatoes may be planted in the valley.  If residents want to grow potatoes they need to go to the Women’s Institute or Home Hardware to get locally-approved seed potatoes.  While the area’s overall contribution to potato farming in Canada is very small ((only about 17 growers) the potatoes of Pemberton are worth seeking out if only for the sake of “eating history”.

The BC Food History website has many lesson plan ideas for incorporating food history into foods classes.