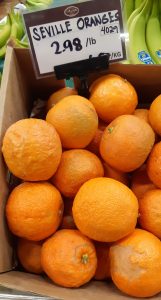 Oranges do not have to be from Seville and marmalade doesn’t have to be made in Dundee, Scotland.  Yet, marmalade that’s not made with bitter oranges runs the risk of being just “orange jam”.  And Dundee marmalade began in 1790 when a Dundonian, James Keiller, bought rotting Spanish oranges (either a shipload or a few boxes, information varies).  His mother, Janet Keiller*, took the oranges and used the peel as well as the pulp to make marmalade as we know it today. (See  the Wikipedia entry on Keiller’s marmalade  as well as 20 Fascinating Facts about Marmalade).

The fruit we call  “orange” in English and French got its name from the Sanskrit “naranga” meaning fragrant. In a stellar example of eponymy, the colour orange named itself. It’s famous for not rhyming with any other word, other than “sporange”.  As an example, in a long- ago scavenger hunt my husband came up with the following clue for an orange-coloured Volkswagen Beetle parked in the abandoned car lot on the back forty:
“What rhymes with orange? Nothing rhymes with orange but it “BUGS” me anyway.”

Seville oranges may be used with impunity by anyone who wants to buy local and seasonal produce and/or isn’t concerned with pretty-looking fruit.  This citrus fruit is bitter, bumpy, only available seasonally (between December and March) and cannot be grown commercially in Canada.

The three main types of oranges are sweet, Mandarin and bitter, and the best known bitter orange varieties are Bouquet de Fleurs, Chinotto, and Seville.  The Bergamot orange is possibly a hybrid of Seville orange and lemon, and an ingredient in Earl Grey tea. Some citrus cousins may be used in marmalade such as pomelo and blood oranges.

“Seville oranges are not to be eaten fresh”

The Italian Centre in Edmonton offers advice for shoppers on a poster above the Seville oranges bin.  The oranges are treasured worldwide, according to the poster, and rarely available. Warnings are given about the greenish colour of the peel at the start of the season (gradually turning more yellow) and the inedibility (“not to be eaten fresh”). The Italian Centre recommends stocking up on Seville oranges when they’re available, processing for boiling, and freezing until you’want to use them. They can be used in marinades for pork and chicken (see this  Mojo Criollo marinades link ) and, of course, Seville marmalade.

Making Seville marmalade is rewarding. Eight Seville oranges and one lemon are enough for a manageable recipe.   Connoisseurs of Seville marmalade differ in their opinions about how to cut the peel (long pieces, short pieces, chiffonade, rough shreds) but the basic proportions are maintained.

A later post will highlight the chemistry of making marmalade. To prepare ahead of time: 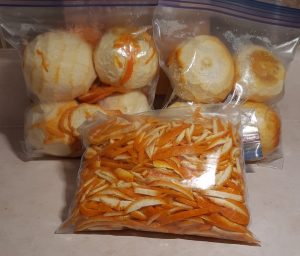 – buy at least 8 Seville oranges (or substitute as necessary with grapefruit, pomelo, , blood oranges, etc.).
– prepare the oranges for cooking (this can be done over a day or two).

COVID-19 interfered with the completion of this project.  We’ll get back to it in February, 2021.

P.S. This blog has been edited to acknowledge Janet Keiller*, mother of James Keiller, for creating marmalade as a spread on toast, its most common use today.