The Easter Ham was a tradition in my family.  Neither 12-foot drifts, 75 mile-an-hour winds, or the prospect of having to walk up to 25 miles could stop our dad from getting home to carve it.

On March 15 and 16 of 1951, a huge snowstorm swept through Central and Northern Alberta. On the first day of the snowstorm, our parents were in Edmonton for a doctor’s appointment. After the storm, winds up to 122 k.p.h. packed the snow so hard that it formed four-meter high drifts on most roads, rural and urban. Only essential roads were plowed.

“Looking back at the spring of 1951” by Michael Dawe appeared in the Red Deer Express 2014 and 2018, describing the “paralytic vise” that gripped the province.

Hilda was advised to stay in Edmonton to await the birth of their sixth child (who arrived ten days later).  Meanwhile, the five other children (between the ages of three and fifteen) were alone out on the farm. The oldest two kept the farm going, caring for the younger kids, looking after the livestock, and keeping the house warm until Jack arrived on foot (either a week or ten days later). They dragged the younger ones on a toboggan out to the highway where the neighbour drove them to Bon Accord hall to see “Bambi”.  Hilda stayed in Edmonton with the new baby until the roads were open. 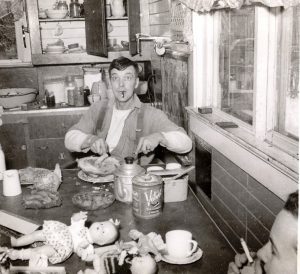 Jack carved the ham for Easter Dinner with a cigar hanging out of his mouth. Maybe he was practicing scruffy hospitality or maybe it doesn’t matter.  He looks pretty happy in the photo, taken by his eldest son.