These three plants are part of one of the greatest food exchanges in history, beginning 500 years ago when various plants and animals were transported between the Americas and the rest of the world, known as the Columbian Exchange[i].  The Solanaceae  plant family, including potatoes, tomatoes, chilis, peppers and eggplants, originated in the Americas and formed part of that exchange.  Another name for this group is the Nightshade family, claimed but not proven to cause negative dietary reactions for some people. Tomatillos, groundcherries and Chinese lanterns are three family members that grow exterior husks on the fruit.

This year I grew tomatillos in the North Okanagan, Physalis philadelphica, which were more common than tomatoes in the early cultures of Central and South America. They are attractive plants with paper-like husks surrounding the tomato-like fruit.  I have read that tomatillos make excellent salsa verde. 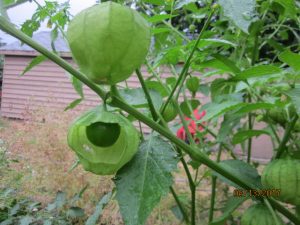 The bottom tomatillo has been cut open so you can see the tomatillo inside the paper husk. 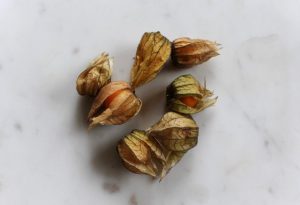 Two other tomatillo-like plants grow readily in parts of BC . The Peruvian groundcherry, Physalis peruviana, also called the Cape Gooseberry grows in a paper husk that falls off the plant and ripens on the ground.  You’ll often find them as a garnish on fancy desserts. This fruit has recently been renamed golden berries by  marketers.  They have a pleasant flavour and the husk is fun to remove.

The Chinese lantern (Physalis alkekengi) looks a lot like tomatillos but turns bright orange when it matures.  Except for the ripened berries, Chinese lantern berries and leaves are poisonous[ii]. They contain the toxic chemical solanine.

Don’t worry too much about poisonous Physalis plants. Many other common plants have poisonous parts. For example, cherry pits contain cynanide, although this is only released when the pit is ground up and eaten. Swallowed whole doesn’t seem to cause problems. You can find out about a number of everyday plants that are poisonous through these sources [iii].

Growing fruit in husks is exotic enough! It was easy to grow the three different plants in Vernon, and last year I saw groundcherries in North Edmonton, so I hope to grow them again.

What Are Golden Berries? The New Taco-Friendly Superfood!