Previous Next
Grist and Flour Mills in British Columbia

Grist and flour mills have provided many homely sayings in the English language (and other languages as well), indicating how important they were to daily life. The mills ground large quantities of various cereal crops to feed growing populations, important in the establishment of agricultural settlements.

The phrase “grist to the mill” is archaic today, but in its time, it represented all things that had a money value.  When  farmers brought their unground corn to the mill (‘corn” was the name for all grains including wheat in medieval England) it had the same effect as money in their hand[i].

Millstones were essential for grist mills. They were large circular stones that ground together and crushed the grain in between the stones into various degrees of fineness. By some curious fashion, the phrase “millstone around one’s neck” came to mean a heavy or emotional burden. [iv] 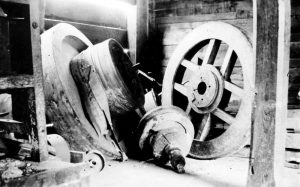 Item B-00636 – Interior of the Barrington Price grist mill, Keremeos. This may show the millstones.

One of the earliest grist mills in BC was at Alexandria on the Fraser River, south of Quesnel, which opened in 1837. Another one was built at Millstream (Victoria) in 1848 where Arthur Bunster (whose name was  previously mentioned on this site in early hops production) was a pioneer entrepreneur in the flour-mill enterprise [ii].

As grain-growing capacities increased in the BC interior, so did the number of mills.  Price’s Mill at Keremeos, built in 1877, started production the next year. The early attempts at milling produced a coarse, dark flour, so the owner, John Barrington Price attempted to improve the quality by importing the latest in milling technology in 1881. This included a “new patent roller from Louisville, Kentucky, as well as “a Eureka Smut and Scouring machine to clean the grain, a Barford and Perkins steel grinding mill, … and a variety of belts and conveyors, all powered by the water wheel.” Price also built a commodious house that reportedly cost $5,000. This required a mortgage which he defaulted on, and the mill was turned over to other hands. It remains one of the few intact mills in the province and was opened  as a historical site, now operating as the Old Grist Mill and Gardens in Keremeos, in 1985[iii].

Before the railway to the interior of BC was opened in 1891, millstones were delivered by the following tortuous route: “They arrived by sailing ship in Victoria, where they were re-shipped to Yale. They travelled by freight wagon to Savona’s Ferry where they were again placed on a steamboat. They progressed through the Thompson River system, Shuswap Lake, and then up the Shuswap River to Fortune’s Landing [Enderby]. From there they were taken overland to the head of Okanagan Lake near Cornelius O’Keefe’s ranch. A rowboat took them to Lequimes Landing [presumably the present site of Kelowna] where they were off-loaded and skidded by stone-boat four miles inland [v].”

NOTE #1: We take many things for granted in our lives.  Up to COVID-19 and the worldwide pandemic and lockdown, this included the ready availability of flour and the choice of whether or not to avoid it completely.  A gluten-free diet would have been unthinkable in BC of 150 years ago when merely obtaining flour in any form was an incredible struggle.

NOTE #2 :  The oldest intact, operating grist mill in the Okanagan and one of few such mills in Canada needs your support!  Go to The Old Grist Mill and Garden site and buy a season’s pass. If you live close enough to take part in their  2020 Pantry Share, check it out at https://www.oldgristmill.ca/shop/shares/2020-grist-mill-pantry-share/