Almost all small Canadian towns have a Chinese restaurant.  “Chop Suey Nation” published in 2019 and written by Ann Hui, mentions chop suey and ginger beef, two popular menu items in Chinese Canadian restaurants from Victoria, BC to Fogo Island, Newfoundland. These constructed dishes have more to do with Canada and Canadian immigrant history than Chinese cuisine.

China is generally considered to have at least eight distinctive and unique regional cuisines[i].  Most of the required ingredients have not been readily available in small-town Canada.  Therefore innovative cooks and chefs used local ingredients and local tastes, often capitalizing on widely held stereotypes of “Chinese food” – for example, relying on soy sauce, ketchup, and the signature components of sweet, salty, tangy and crunchy.  (Hui’s book relates how finely shredded cabbage substituted for noodles in the Fogo Island restaurant she visited).

The invention of chop suey[ii]  is attributed to Chinese laborers working on the U.S. transcontinental railroad, or Chinese immigrants in San Francisco. The name is based on a Chinese (Cantonese) term for ‘odds and ends’ or ‘miscellany’.  In 1896 it was popularized by a visit to New York City by Li Hong Zhang[iii], the Chinese Ambassador to the U.S. 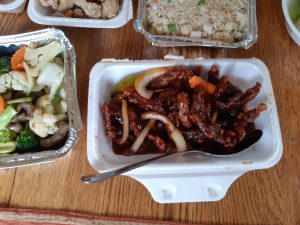 Ginger beef seems to be purely Western Canadian in origin, and according to Hui, was invented at the Silver Inn Restaurant in Calgary by George Wong in the mid 1970s as “deep-fried shredded beef with chili sauce” (p. 79).  Hui claims that (mostly non-Asian) customers could not remember chili was its main spice, and referred to it as “that beef with the ginger stuff” after which it became wildly popular.  (This makes me feel sad, actually).

We probably have to concede Chop Suey to America, but Ginger Beef is as uniquely Canadian as Nanaimo Bars or Poutine.

[i] According to a 2011 publication from Agriculture and Agri-Food Canada, the main regional cuisines of China today are: Shandong, Guangdong, Sichuan, Hunan, Jiangsu, Zhejiang, Fujian, and Anhui,  See also: https://www.travelchinaguide.com/intro/cuisine_drink/cuisine/eight_cuisines.htm

[ii] For a discussion of chop suey, see  http://www.foodreference.com/html/fchopsuey.html

Li was a member of the Imperial Court for the Dowager Empress. For his 1896 trip to America, he brought his own chefs and food.  Crowds lined the streets of New York to see him go by.