Strawberries Native to BC 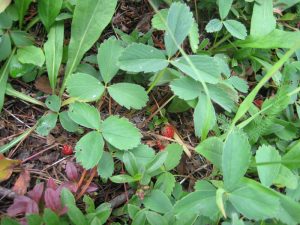 When I was young, the highlight of our summer was two weeks at the lake in a rustic cabin with no running water or electricity and just a Coleman camp stove.  If the weather was cool and we weren’t swimming or on the beach, we would tramp through the fields and woods looking for adventure. Once in awhile we would be lucky to come upon native BC strawberries.  If we reported this to our mother, she would send us off with a honey bucket (similar to the one below) on the off chance a few might make it home for dessert.

You have to look closely to determine one kind of strawberry from the others. Take a close look at the leaf.  The wild strawberry leaflets are often bluish green  whereas the wood strawberries are more yellowish and the coastal strawberry are a bit thicker and can be evergreen.  All have three to five white flowers and each flower has five petals.  The flower clusters in the wild and coastal strawberry are found under or at the level of the leaves while the wood strawberry flowers appear above the leaves. Horizontal runners, called stolons, arch from the parent plant and, where they touch down, a new daughter plant develops. Native strawberries are easily grown in the garden from these daughter plants. Simply cut the runner between the mother plant and daughter plant, carefully remove the daughter plant from the soil and replant with the root crown at the same level as it was when you removed it.

Strawberries are not classified by botanists as a true berry. True berries, such as blueberries and cranberries have seeds inside the fruit. The strawberry has its dry, yellow “seeds” on the outside (each of which is actually considered a separate fruit). Each seed on the outside of a strawberry is technically a fruit and must be pollinated separately. The red fleshy part we eat is the swollen central part of the flower, or the peduncle, to which the seeds are attached. 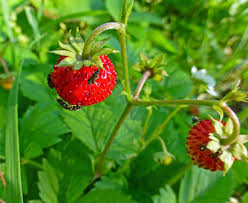 The wild and coastal species have been involved in the ancestry of one or another variety of cultivated strawberry. The garden strawberry has its roots in Europe from these two New World species. Wild strawberry found its way to Europe from Eastern North America after the initial waves of settlement. Coastal strawberry came to Europe from Chile in the early 1700s. Both began to be grown widely because of their superior flavour to European strawberries such as the wood strawberry. At some time in the 1700s, coastal and wild strawberries appear to have formed a natural hybrid in a European garden where both were being grown. The resulting fruit was much larger and the plants more productive than either of the parents, and it retained the excellent flavour of both parents. In no time this strawberry with foreign ancestors came to dominate production in Europe. Being so superior to the wild versions its cultivation spread round the world, returning to the Americas from which its parents had originated[ii]. The First Nation peoples throughout BC prized native strawberries, mainly eating them fresh but at times mixing with other berries and drying.  Most native strawberries are best enjoyed fresh.

Occasionally we did arrive home with some strawberries in our honey bucket and when we were at “camp” my mother would make strawberry shortcake.  She would improvise an oven on the camp stove with her trusty Wear-Ever© roaster.[iii] She would put the rack in the middle put the roaster on the two burner camp stove heating it up so that the biscuit/scone dough would be placed on the rack to “bake.” [It seems like every household in Canada and the US had Wear-Ever©, but that’s another story.] 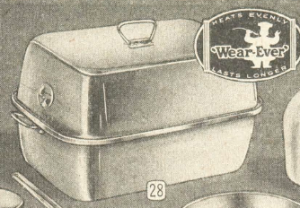 Then one of us kids would be assigned to whip the cream that had been stored in a waterproof box in the creek.  We would use a hand beater something like this: 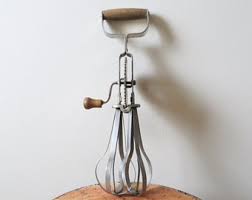 Just a small food memory that highlights so many opportunities for exploring food history:  the history of commodities (honey, strawberries); the history of tools and techniques used in food preparation; the ingenuity of cooks; how recipes reflect the times (biscuit dough rather than sponge cake and unsweetened whipping cream for the shortcake) and so on.  It’s a bit late in the season to forage for strawberries but you never know, some of the everbearing varieties will continue to produce until fall.

[i] Hebda, R. (2014). A Field Guide to Edible Fruits and Berries of the Pacific Northwest.  Madeira Park, BC: Harbour Publishing.