For many people, when the winter snow and rains give way to spring, and new life begins to green the landscape, it is time to “eat your greens.” For First Nations and early settlers, the early growth of plants such as the stinging nettle, chickweed, miners lettuce, dandelion or fireweed was a source of nutrients (especially Vitamins A and C) that were lacking in their winter diets. In the absence of modern supermarkets with a year round supply of endless varieties of fruits and vegetables, they had to rely on Mother Nature to maintain their health. Many continue this tradition to this day and with the trends to eating local, to eating organic, to questioning the current food supply system, and eating wild, there is more interest in foraging and harvesting.

Depending on where you live, you might be nearing the beginning or the end of nettle season. Although they are edible all spring and summer until they flower, they are best when young and tender. If you have ever encountered stinging nettles, you know they do indeed “sting.” The long, thin, hollow hairs that cover the stem and the underside of the leaves can pierce the skin and cause irritation. These are adaptions by the plant so that herbivores don’t eat them. However they are edible when blanched in boiling water to remove the stinging qualities. 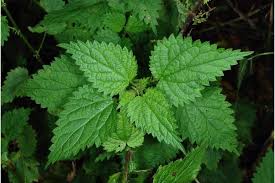 If you decide to do some foraging for nettle leaves, wear protective clothing (long sleeves and long pants) and gloves, and bring scissors to cut them. They like moist areas in the edges of clearings, in old fields, and country or logging roadsides. They are easy to identify as they have sharply serrated leaves that grow in opposite pairs on a hairy stem. Cut just the top six leaves and leave the plant undisturbed so it can continue to grow. When foraging for spring green make sure of your identification (the forager’s golden rule is never eat anything that you can’t identify with 100% certainty) and never harvest in places where there is chance of contamination, for example from chemical pesticides, herbicides or dog droppings such as public parks or major highways.

Nettles can be eaten fresh, dried for teas, or frozen. They have minty, spinach-like qualities and can be used in any recipe calling for spinach. Nettle tea was, and still is, considered a spring tonic.

If you are new to foraging, then I recommend The Deerholme Foraging Book: Wild Foods and Recipes from the Pacific Northwest, by Bill Jones of Duncan, BC published in 2014 by Touchwood Editions.  It is available from most bookstores and in many libraries and from his website http://www.deerholme.com/. 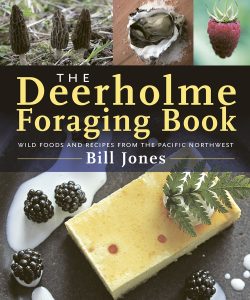 Those of you who are Outlander fans may recall that Claire was always trying to get Jamie and his men to eat greens. One book mentioned smashing nettles and putting them on bannock. Perhaps this was a early version of pesto. So consider using nettles in place of the greens in your favourite pesto recipe. Make sure you blanch the nettles (immerse in boiling water for 30-60 seconds, then immediately transfer to ice water) first.