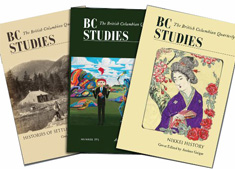 For the past year one of the projects of the BC Food History Network has been to determine what has been reported that could be considered “food history” in historical journals produced in BC. We undertook this exploration to serve two functions: a) to determine what has been written specifically about food history in BC; and b) to create a reference for researchers interested in BC Food History.

The journal I examined was BC Studies: The British Columbia Quarterly.  Established in 1969, this journal is dedicated to the exploration of British Columbia’s cultural, economic, and political life; past and present. It is located at the University of British Columbia and is a peer-reviewed journal publishing original scholarly research. Articles range from a number of fields of study such as anthropology, archaeology, archival sciences, art, art history, demography, economics, education, First Nations and indigenous studies, gender studies, geography, history, linguistics, literature, museology, music, photography, political science, and sociology. Since its inception, it has been edited by historians, geographers, educational historians, political scientists, and anthropologists.

Each journal issue from 1969 to winter 2016/17 were examined and titles labeled “articles” or “review articles” that appeared to be related to food, food production, agriculture, farming, ranching, plants and animals consumed as food, tools or technology used in food production and consumption were read and annotated.  This annotated bibliography is now available on the BC Food History website at https://bcfoodhistory.ca/wp-content/uploads/2017/04/BC-Studies-Annotated-Bibliography.pdf

The scholarly food related reports in this journal appeared to revolve around three main themes First Nations and indigenous culture and food practices, agricultural production, and fishing. The First Nations content was typically anthropological whereas the agricultural and fishery content was generally a combination of economic, political and historical considerations.

I enjoyed reading the articles and I learned a lot about food history related to BC.  For example, there were articles that elaborated the politics behind topics such as Agricultural Land Reserve and other policies related to land and resource use, articles on the history of places such as Walhachin, on canneries that have disappeared from our landscape, on the foodways (the intersection of food in culture, traditions, and history) of some of BC’s First Nations, and a couple of articles that examined the material culture of cookbooks. On the whole food was not a dominant theme in this journal which perhaps is not surprising but could be seen as an opportunity for food and culinary historians.

[I]f future historians want to look at what life was like in the early 21st century – the technological and information revolutions, the blessings and dangers of globalization, the challenges to the survival of the healthy planet – they would do well to look at our food (p. 43).