Previous Next
Selling BC Apples

It was challenging to sell BC apples in the 1930s.  In 1931, based on data from 1926 to 1930, British Columbia led five provinces in total apple production (reported at an average of 1,279,000 barrels). In 1937, while BC apple production had increased it was surpassed by Nova Scotia. In 1942, BC once again edged out Nova Scotia in the number of bushels produced.

In the decade from 1931 to 1942, the Department of Agriculture of the Federal Government in Ottawa produced at least three versions of “Canadian Grown Apples” (1931, 1937, 1942) that marketed Canadian apples. The booklets varied in length from 23 to 28 pages. They contained information on The Fruit Act (1901) that made grading of apples compulsory and the later Fruit and Honey Act and The Fruit, Vegetables and Honey Act passed in 1935. Information was included on buying by grade, nutritional value, the leading varieties of Canadian apples, and 104 recipes. The wide range of recipes included: Apple Catsup, Pickled Apples, Salads, Pies (13 recipes), Main Courses, Coddled Apples and Applesauce and Pork Dinner. Some recipes had exotic names such as: Apple a la Manhattan, Apples a la Parisienne, Dutch Apple Cake, Fairy Apple Pie, Brazilian Salad, Waldorf Salad, Apple Charlotte, and Allerton Apples. 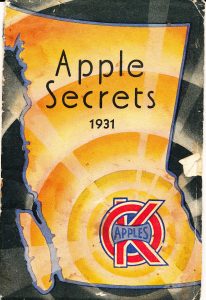 While the Federal government promoted Canadian apples, British Columbia fruit growers were more concerned about marketing BC apples. Apple Secrets, published in 1931, was a small booklet of recipes compiled by Alice Stevens for the Associated Growers of British Columbia. Many of the recipes were the same as those in the Federal Government publication. The Associated Growers of British Columbia was formed in 1923 to lead co-operative marketing among Okanagan area fruit producers. The Produce Marketing Act (1927) of BC was the government response to urging from the BC Fruit Growers for more organized marketing. But 1931 and 1932 were a tumultuous time in marketing BC fruit. Production was climbing with prices falling![i] The BC Fruit Growers’ Association fell into bankruptcy and it would have to go through economic recession and ravaging fruit diseases diseases before BC Tree Fruits emerged in 1939 as an agency with full control of domestic sales of tree fruits in BC and responsibility for keeping BC apple sales up.

Note: Click on  Apple Secrets  to see the entire pamphlet.