Salmon Canneries in BC – the Smith Butcher Machine

Previous Next
Salmon Canneries in BC – the Smith Butcher Machine

If you follow the BC Food History Facebook page, you’ll see a recent post about Joe Coyle, the BC man who invented the egg carton. There’s another invention that deserves recognition for even more long-reaching effects on the BC food industry. The Smith Butcher Machine (also known as the “Iron Chink”) was both a technological advance in salmon processing and an expression of anti-Chinese and immigrant sentiment in the early 1900s up and down the Pacific Coast.

Salmon canneries were extremely important to the development of the BC food industry.  Chow (2001) gives insight into the workings of a cannery.  Chinese workers were the first to arrive at a cannery because they made the tin metal cans. After the fish were brought into the plant, the next job was fish-sorting and then gutting or “slitting”.  Some Chinese workers could each butcher about 2,000 fish in a 10-hour day. Native women would then scrub off the scales and trim and wash the fish.  When mechanization came to the canning line, the “human butchers” could not keep up with steam closing machines, can fillers, steam cookers and conveyors.  In 1905 Edmund Augustine Smith came up with a patent idea that revolutionized the industry, a mechanical butcher machine. 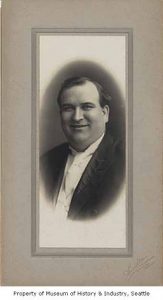 Smith was born at London, Ontario in 1851 and moved with his family to BC when he was quite young. He was described as a “large, intelligent, inventive man who loved practical jokes” (Scott-B, 2005, p. 21). In 1900 he invested in the Alaska Fishermen’s Union which had a cannery at Chilcat, Alaska, where he soon learned that his investment was not all that lucrative. Smith came up with a compact and circular machine for butchering fish that freed up floor space for storage. Only two men were needed to work the machine. His idea was originally called the “Iron Chink” (both a racist and an anti-Chinese immigrant name.) By 1907 Smith had refined his machine, now known as the Smith Butcher Machine so that it cleaned the whole fish automatically.  He continued to invent machines for fish canning, one of which was an automatic weighing machine.  This was produced after his untimely death in 1909 and used extensively in salmon, meat, fruit and vegetable canning.

This description of Smith’s invention does not take into account any of the human costs of his invention, such as jobs and occupations lost, not to mention the cruelty of the “Iron Chink” nickname for the machine.

Note: Back copies of British Columbia Historical News are available online through a link to UBC Library on the BC History website,  http://www.bchistory.ca/british-columbia-history/