Previous Next
Before potatoes there were….parsnips 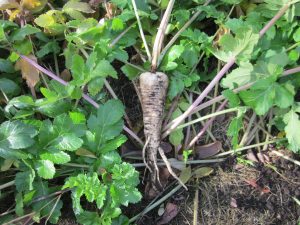 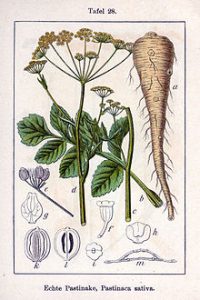 Before potatoes  there were….parsnips. This homely root vegetable was popular up to the 16th century in Europe when the potato finally made its way across the Atlantic Ocean as part of the Columbian exchange.

Parsnips are first cousins to carrots and native to Eurasia where they have been eaten for thousands of years.  Their botanical name is Pastinaca sativa, a member of the parsley family, a biennial plant, usually grown as an annual. They grow in temperate climates and can be left in the ground throughout the winter. Their flavor becomes sweeter after a frost – before cane sugar was widely available, their sweetness made them popular.

Boiled, baked, steamed, mashed with potatoes, used as a flavouring for soup stock, and even made into chips, they are a versatile vegetable. Roast parsnips are considered essential for Christmas dinner in some cultures.

The shoots and leaves of domestic parsnip can be toxic for some people, causing a skin reaction. It’s probably a good idea to wear gloves the first time you harvest parsnips to see if you are allergic or not.

A couple of wild parsnip relatives, cow parsnip and giant hogweed have well-deserved bad reputations.[i]   Cow parsnip is poisonous to livestock and can cause severe skin reactions.  However giant hogweed is positively lethal and has caused third-degree burns to some people.

These two recipes[ii] are from the Christian Science Monitor: they both sound rather good, so if I get my courage up to harvest this year’s parsnips (the first time I have ever grown them), I might try them:

Cut parsnips and potatoes into 1/2-inch cubes. Place in a pan and cover with water. Boil, reduce heat, and cook until parsnips are just tender – about 10 to 12 minutes.
Drain, puree in a food processor. Add salt, pepper, butter, and cream. Process until just blended.  Serves 4.

Cut parsnips in thin rounds. Saute in melted butter for 6 to 8 minutes or until just tender when pierced with a knife. Add salt and pepper just before serving. Serves 4.