Previous Next
Cookbooks Might be Going Out of Style

Are cookbooks going out of style? Nowadays people are more likely to turn to the Internet for recipes, if they cook at all.  Take-out is taking over.  What is the place of the cookbook? Are they obsolete? I would like to argue that cookbooks are important, even critical historical documents that need to be recognized as such. There are lots of reasons for studying cookbooks.

Cookbooks tell you about favourite recipes; they fall open at splattered pages; there are running commentaries about the success or failure of the recipe, possible substitutions, suggested serving sizes; even events.

Cookbooks reflect the economic, social and political times; they are microcosms of daily life. The recipe that comes to my mind first is “War Cake”; no eggs, very little fat; developed as a result of rationing in the Second World War.

The pleasure of opening an old cookbook will never be replaced by the Internet although that venue has some similarities. Just as a community cookbook will have several versions of one recipe, the Internet will offer hundreds. In each case you can find recipes by specific people who live in communities, real or virtual, and who have most likely actually tried the recipe with which they are credited.

Cookbooks are made up of recipes; the recipes are stories in themselves. By exploring the recipes we learn the stories. For example, here is a recipe from my mother’s recipe box: 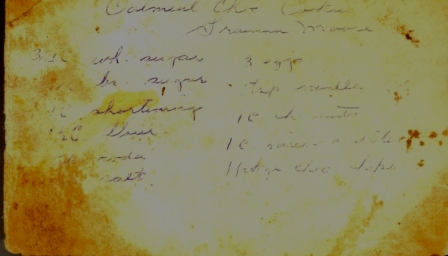 What story is this recipe telling?

If I could provide you with the actual recipe card, you would see the browned edges of the card are oily and there are splotches of cookie dough. That would be one part of the story; my mother never cooked without a recipe (I don’t either). The recipe has been used many times.

Who is Granma Moore? As it happens, I remember her, my aunt Helen’s mother, a sweet-faced woman who came to visit occasionally. It’s probably fifty years since she died.

What does the recipe pre-suppose? First of all, it is in teaspoons and cups, well before our current haphazard measuring conundrum of metric vs. Imperial. It seems rather egg-heavy; but on the farm, eggs were almost always plentiful. It uses rather more salt than we would today; and it treats raisins and dates as equal substitutes. I would guess that few people today would use either ingredient and certainly not dates. There’s also no oatmeal listed in the ingredients – is the amount assumed? Would the cook have enough experience to look at the cookie dough and say, “Hmm, I think about 1 cup of rolled oats would be enough to make a dough that would hold together.” From the grease-stained state of the recipe, it has definitely been made a lot, so the cook must have figured that out.

There’s also no method. A beginning cook might not know to combine both kinds of sugar and the shortening until fluffy, and then beat the eggs and vanilla in well. The sifted flour, soda and salt would be added next; the missing oatmeal added and finally the nuts, raisins, dates and chocolate chips added.

What next? The cook would have to know about oven temperature; pan preparation. It wouldn’t hurt to know a bit about the history of the cookie; it originated from the Dutch word, koekje, meaning little cake, originally used to test the temperature of a woodstove oven , like Granma Moore would have used. It’s never “just a recipe”.