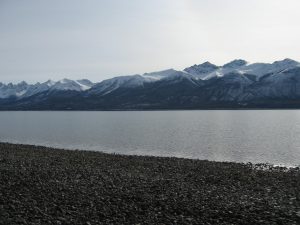 Photo of Chilko Lake, BC

A few years ago I had the wonderful opportunity of visiting Nemaiah Valley in the heart of the Chilcotin, home of the Xeni Gwet’in First Nation, one of six Tsilhqot’in communities[i].  I was hired by Preserve Safe™ [ii] to do a workshop on up-to-date safe food preservation methods. While I was there I stayed at a delightful bed and breakfast in a big log house on the shores of Chilko Lake.[iii]

My hosts were Jim and Dina Lulua.  One evening Dina showed me slides of a trip to Potato Mountain made by members of the village the previous summer. Some hiked, some rode horseback and the elders were flown in by helicopter.

This trek was a time honoured tradition in search of Wild Potatoes. Since prehistory the Xeni Gwet’in have harvested mountain potatoes (actually the corms of the western spring beauty, Claytonia lanceolata)  to eat immediately, store for delayed consumption, and for use as a trade good. I had never heard of Wild Potatoes so I was really curious to know more about them.

Potato Mountain (Tŝinuẑch) and the Potato Range is in the Chilcotin (BC Central Interior) located between  Chilko Lake and Tatlayoko in the traditional territory of the Tsilhqot’in First Nation (see map[iv]). It is here in the subalpine and alpine meadows that Claytonia lanceolata, Spring Beauty grows abundantly. The generic name Claytonia is after 17th century English botanist John Clayton, who collected plants in North America. Lanceolata refers to the shape of the rather fleshy, lance-shaped, paired leaves. I was there in the early spring and the snow was still on the mountains. Later in the spring you can see the flowers along with other alpine flowers.[v]

As the snow recedes, smooth, lance-shaped leaves emerge from the mountain meadow turf, and Spring Beauty sends up its slender 6-inch bloom stems, topped by clusters of delicate 5-petalled flowers, purest white to ethereal pink. These bloom with such abundance as to turn whole areas white, mimicking the just-vanished snow.[vi] 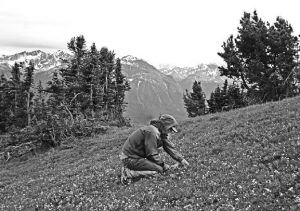 An ethno-cultural survey of the Xeni Gwet’in First Nations community living in the Nemaiah Valley, found[viii] that the wild potatoes were an important source of traditional food: Thirteen community members interviewed included wild potatoes in their diet and 6 interviewees consumed bear tooth. Several community members reported that the Xeni Gwet’in have traditionally made an annual trip up Potato Mountain between Lake Tatlayoko and Chilko Lake to harvest the wild potato, which is considered a delicacy. However, several interviewees reported that the annual treks up Potato Mountain have diminished since the opening of the road in 1973 and the arrival of the automobile in the Nemaiah Valley. The roots are typically removed from the ground, washed,and then fried or baked in the ground under a fire (i.e., pit baking). (p. 108)

Nutrient testing undertaken by an Eastern Washington University student  corroborated what generations of First Nations people likely understood, that Claytonia lanceolata is a good source of mineral nutrients.  Reilly (2015) found that a single serving of corms (100 g fresh weight) likely provided between 10-25% of the Daily Required Intake (RDI) for magnesium, phosphorus, copper, and zinc, and over 100% of the DRI for iron and manganese. Reilly concluded that consumption of the corms could increase health and prevent nutrient deficiencies if/when it was eaten in place of less nutritious modern foods. [ix]

Studies indicate that the Xeni Gwet’in people also employed plant management strategies such as planting scattering the seeds, thinning the plants so the ones left have more room to grow[x].  This is in keeping with Xeni tradition of treading lightly on the land and living in harmony with nature[xi]. 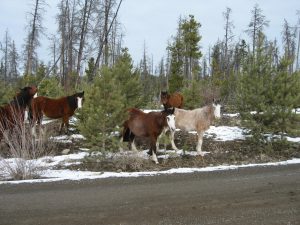 They have also created the only wild horse preserve in western Canada[xii].