Previous Next
The Nanaimo Bar

Who would have thought that Nanaimo Bars could be so controversial?

We have always claimed Nanaimo Bars as a quintessential BC food mainly because of the name and the outstanding branding done by the city of Nanaimo on Vancouver Island.

This famous recipe has been shrouded in mystery as no one has been able to pin-point for sure when it was created and named (de Zwart, 2010; Newman, 2014)[i]. It has been suggested that that the Nanaimo bar is based on a recipe for unbaked chocolate cake published in the Vancouver Sun in 1947 and republished in 1948. Some claim it was “invented” pre 1950’s by late 1930’s by the Nanaimo Hospital Women’s Auxiliary and/or the auxiliary of St. Paul’s Anglican Church. But others point out that a similar recipe was being made as far away as Newfoundland or Ontario going by names like “New York slice,” “London fog bar” and “prayer bar.” The first known recipe for Nanaimo bars appeared in the 1952 Women’s Auxiliary of the Nanaimo Hospital Cookbook and was labelled “chocolate square.” One year later, a similar recipe was published in Vancouver’s Edith Adams’ Cookbook, this time going by the name “Nanaimo Bar.”

The most recent controversy relates to the size of the layers. For example, in March of this year, the CBC news ran the headline “New York Times Nanaimo bar flubs golden ratio, say experts (ahem, us).”  It referred to a picture in an Instagram account that showed the base as very thick[ii]. 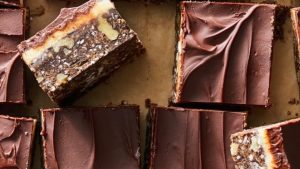 Prior to that, the Canadian Postage Stamp issued in 2019 also got the ratio wrong. The CBC headline in that case was  “Nanaimo bar fans going postal over ‘impostor’ square depicted on new stamp”[iii].  The bar on the stamp was deemed probably unstable and very sloppy to eat as there was far too much of the custard–icing layer. 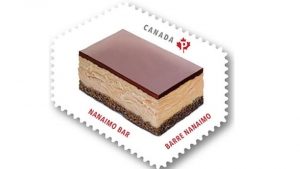 There seems to be common “Canadian” agreement that in a “real” Nanaimo Bar the base and custard-icing layer should be equal and the top chocolate thin.  If we wanted to be specific the bottom two layers should make up 7/8ths of the bar (7/16ths each) and the top layer (1/8th).

The other potential controversy, not yet taken up in the news, might be what are the ingredients and the proportion of those ingredients of the “real” Nanaimo Bar?  Let’s compare a few recipes.

In the first column, we have the Ultimate Nanaimo Bar.  This recipe was the winner of a contest held in Nanaimo in 1986. During the four-week long contest, almost 100 different variations of the famous confection were submitted. The winner was Joyce Hardcastle and this is her recipe[iv]. It appears on the city’s website.

In the middle column, we have Susan Mendelson’s recipe. She is a BC cookbook author and caterer who is credited with popularizing the treat. It began with her selling the bars during the 1970s to help pay her university tuition, and evolved in1979 to The Lazy Gourmet, a café and catering company in Vancouver. It claims to be the first business to sell Nanaimo bars. When Expo 86 was held in Vancouver, Mendelson wrote the event’s official cookbook and it included a recipe for Nanaimo bars. This spread the word far and wide as many people picked up the cookbook for a souvenir. The recipe also appeared in her 1980 cookbook Mama Never Cooked Like This[v].

In the third column we have Auntie Mary’s recipe.  This is the recipe that is circulated in my family and often bragged about as “the best Nanaimo Bar ever.” I got a copy from my cousin Sally. Our auntie passed away a number of years ago so we have no idea what her source was.  We do know that she lived in Vancouver in the early 1950’s so may have got it from one of the newspapers that published it at that time. It is fairly close but not exactly the same as the one in the Vancouver Province Modern Kitchen spring supplement of 1953[vi]. She was also involved with her church’s womens’ auxiliary and various volunteer groups so she may have come across it through recipe sharing.

While there are similarities in ingredients, here are many slight variations.  For example:

Although the variations are not huge, it is still likely that there are subtle differences in the final product. Often what matters is our personal connection to the recipe. Those who consider Nanaimo home might go for the Ultimate recipe, those who shopped or ate at The Lazy Gourmet might want to try that recipe.  For me, I’ll always choose Auntie Mary’s because she was always the much loved “favourite aunt”, who fussed over us kids, and spoiled us whenever she could. Her recipe brings back all those feelings of familial connection, love and comfort.

Do you make Nanaimo Bars? What recipe do you use and how does it compare?

With Easter coming up you might want to try making Nanaimo Bar Easter Eggs. A variation I sometimes make just for an Easter treat by shaping the base or first layer in to egg shapes with an indentation for the icing/custard layer. 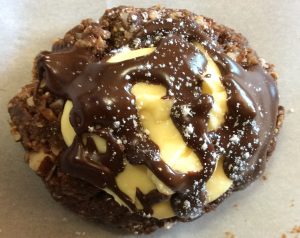 [ii] https://www.cbc.ca/news/canada/british-columbia/nanaimo-bar-controversy-1.5935977 ;also the source of the image

[iii] https://www.cbc.ca/news/canada/edmonton/nanaimo-bar-canada-post-stamp-controversy-1.5116981; also the source of the image.