What makes stew “Canadian”? Why was the name of War Cake in the First World War changed to Eggless Spice Cake in the Second World War? An extensive collection of military rations and cooking in Baird and Wranich’s book Recipes for Victory features almost 150 pages of recipes drawn from cookbooks of the time, presented in their original form and in “Modern Equivalent” versions.

Two recipes drew my attention: Canadian Stew and War Cake. The original recipe for Canadian Stew used measurements for individual portions (see Baird and Wranich for the original as well as a modern version).  The source of the recipe was the notebook of W.J. Johnston, 55th Battery, 13th Brigade, Canadian Field Artillery, Canadian School of Cookery, 1917.

Baird and Wranich suggested that the Canadian aspect of this stew could be the ratio of bacon to beans. Bacon and beans were staple foods for miners, traders and travellers on the Western Canada frontier. Canadian Stew combines all these staples together in one casserole type dish baked in the oven.

Recipe for Canadian Stew (per portion)

Wash, soak & rewash then cook the Beans for 2 hours. Slice the Bacon & add the syrup Pepper & Mustard to the Beans, place a layer in Bacon dish then a layer of Beans then layer of Onions sliced and continue in this way till pan is filled cover with stock & cook in moderate oven for 1 ½ hours.

In a blog post of November 2016, I first looked at Canadian War Cake (https://bcfoodhistory.ca/canadian-war-cake/). Baird and Wranich (2018) include a recipe that appeared in the book: Allied Cookery: British, French, Italian, Belgian, Russian by Grace Clergue Harrison and Gertrude Clergue in 1916. They comment that it was a popular treat to send overseas in both World Wars.

Boil these ingredients 5 minutes after they begin to bubble. When cold, add 1 teaspoon soda, dissolved in 1 teaspoon hot water, and 3 cups of flour.

This recipe is identical to one that was hand written into my friend’s grandmother’s cookbook in 1905 in Scotland and to the recipe appearing in the Daughters of the Allies Conservation Cook Book (1918) from Calgary. The “modern equivalent” recipes that Baird and Wranich provide are useful for those wishing to prepare the recipes today and I highly recommend their book for those who want to try vintage cookery.

I checked my collection of World War II cookbooks to see if Canadian War Cake was included in them. It appears to have remained a part of recipe collections but the name was changed to Eggless Spice Cake or Eggless, Butterless, Milkless Cake. Not such catchy titles but possibly the result of rationing that did occur in Canada during World War II. 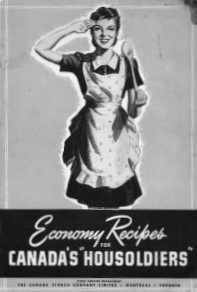 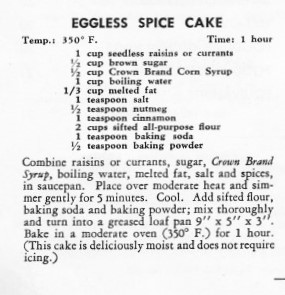 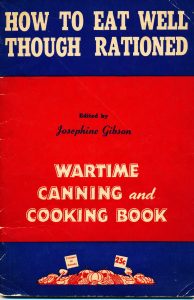