Previous Next
Bunch Grass and Beef 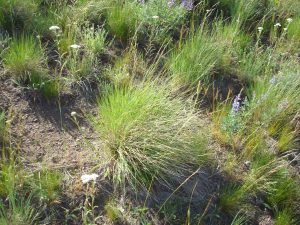 By guest blogger Ken Mather, author of several books on pioneer and ranching history, including Trail North, Ranch Tales and the most recent Stagecoach North. Ken has worked in curatorial, management and research positions at Hat Creek Ranch, Historic O’Keefe Ranch and Barkerville.

In the hot dry interior of British Columbia, the predominant vegetation is bunch grass. The term “bunch grass” refers to types of grasses that are characterized by their growth in tufts or bunches from a single root system.  As the stems of bunch grasses grow up and outward from a narrow base, the stems and leaves form an “umbrella” protecting the base and root system from sun and evaporation.  In the same manner, the stems act as a funnel to channel moisture into the centre and down into the root system.

The most common type of bunch grass in British Columbia is Bluebunch Wheatgrass (pseudoroegneria spicata). For millennia, Bluebunch Wheatgrass was the climax vegetation that covered the valley bottoms and south slopes of the Interior Plateau. It grows up to one hundred and thirty centimeters in height and covers up to one and a half square metres in surface area. Its leaves that are blue-green in colour, give the species its name. Other common bunch grasses are Rough Fescue, Idaho Fescue and Giant Wild Rye.

The Indigenous Peoples of the Interior Plateau found these grasses to be particularly nutritious for their horses, that arrived on the region in the mid-1700s. The fur traders, who entered the area in the early 1800s, also found the bunch grass to be excellent forage for the horses they used for packing furs out of the rich fur areas of the north and trade goods back in. In 1855, Fort Kamloops had some 736 horses, including breeding mares along with colts and yearlings.

During the early gold rush years in British Columbia, ranchers in the Willamette Valley of Oregon and the Yakima Valley of Washington Territory eyed the Cariboo market as an outlet for disposing of their over-abundance of beef cattle. As early as the summer of 1858, cattle were being driven into British territory north of the Forty-ninth Parallel through the Okanagan Valley. Drovers, as they called themselves (the term “cowboy” not being in general use) found that their cattle could graze on the bunch grass that grew along the way and actually gain weight as they travelled.

The excellent rangeland in the interior valleys of the Colony did not go unnoted. Joel Palmer, who in 1858 brought through the Okanagan wagons full of supplies and a few head of cattle, reported,

“[The territory] possesses likewise, extensive agricultural districts east of the mountains,      which have hitherto been considered by many as barren wastes.  The valley of the Okinakane [sic] itself is capable of sustaining a population equal to two counties, producing all the fruits and vegetables usual in that latitude.  It is well watered and a large portion is timbered.  For grazing purposes it is excellent.  The Si-mil-ka-meen Valley also contains considerable fine agricultural land and timber.”[i]

The Colonial Government was informed of the great potential for settlement in the Interior by Lieutenant H Spenser Palmer of the Royal Engineers, who travelled through the Thompson and Okanagan areas in September 1859. He reported, “Bunch grass of excellent quality, probably the best-known grazing food for cattle and horses, occurs everywhere in great quantities.”[ii] Dr. Cheadle, who visited the area with Lord Milton in 1863, recorded in his diary on August 30, “Great nutritiousness of pasturage about Kamloops. Bunch grass. Cattle brought from all around to winter. Get fat in a very short time.” A few days later, on the way to Cache Creek, he wrote, “Fine hills running close to the lake … sparsely timbered, yellow with bunch grass.”[iii]

Soon, enterprising drovers were taking up land along the trail and starting their own ranches. Cattle thrived on the bunch grass ranges and the resulting beef was lauded by all who tasted it. The Reverend George M Grant, who travelled through the Rockies with the Canadian Pacific Railway survey party in 1872, declared, “”Turtle soup out of a gold spoon’ is meager fare compared to Kamloops beef.  After a few samples at breakfast, we were willing to subscribe to all that has ever been said in favour of bunch grass as feed for the cattle of kings.”[iv]

But the lush bunch grass ranges were too good to last. Even Grant’s favourable comments had to be modified when he passed through the Ashcroft area. “It is little better than a vast sand and gravel pit, bounded by broken hills, bald and arid except on a few summits that support a scanty growth of scrub pines. The cattle have eaten off all the bunch grass within three or four miles and a poor substitute for it chiefly in the shape of bluish weed or scrub, called sage grass or sage bush [sic] has taken its place.”[v] This gradual overgrazing of bunch grass was taking place all along the trail to the Cariboo and, what was happening there, was soon to happen on the ranges of the Interior.

As ranchers realized the devastating effects of over grazing, they began to carefully steward the resource. But the dwindling of the gold rush market left a surplus of cattle on the ranges and the deterioration of the bunch grass resource continued. By 1881, the British Colonist reported, “these vast rolling plains intersected by wooded heights are covered with the most nutritious of all known grasses which grows in tufts and hence its name as bunch grass…It has been found, however, that constant feeding summer and winter wear it out … Hence it is that some portions of the great Interior, such as Cache Creek section for instance, the magnificent bunch-grass which 15 or 20 years ago grew two or three feet high is now nearly exterminated.”[vi]

There are still areas of the BC Interior where bunch grass ranges can be found and where ranchers carefully conserve this resource. But the era of “bunch grass beef” has ended.