White Spot – a BC legend

Previous Next
White Spot – a BC legend

We were recently contacted by Laura Brehaut of the National Post who was doing an article on the allure of White Spot’s secret “triple O” sauce[i]. Occasionally here at the BC Food History Network, we get such requests.  Sometimes we can assist and sometimes not, but the requests always pique our interest and have us perusing references and old cookbooks.

Although I wasn’t able to shed much light on the recipe for the sauce, I enjoyed sharing memories of eating at the White Spot. Laura remembered the signature Pirate Pak – a meal for children that came in a cardboard boat that was launched in 1968 and just recently went digital with an interactive app[ii]. I remembered the uniqueness of eating in the car at our end of summer trips to Vancouver where we got new school clothes and went to the PNE. The three of us kids (my brother, sister and me) sitting in the back seat of a 1950’s era car with the tray that ran across from window to window at the White Spot on South Granville Street looked much like this image:[iii] 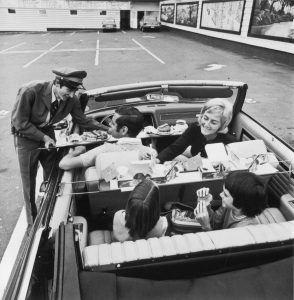 I also remembered a bunch of us UBC students would pile into a car and go to the White Spot on Broadway for a burger. This location, by the way, is one of a handful of White spots that still offers car service.

What many may not know is that White Spot has been described as Canada’s first drive-in restaurant. Although others have claimed that Eamon’s Camp in Calgary[iv]was the first drive-in, it didn’t open until 1949 whereas the first White Spot restaurant with drive-in service was opened in 1928 at the corner of Granville and 67th avenue in Vancouver. That makes it almost 90 years old.

It was opened by Nat Bailey who started out by converting his 1918 Model T truck into a travelling lunch counter to serve hungry sightseers at Vancouver’s Lookout Point (perhaps another first? The first food truck as harbinger of the popularity of food trucks that has burgeoned in the past decade).

Why it was called the White Spot is not clear. Some suggest that it was named after a restaurant in Los Angeles[v] while others say it was because “white” made it sound spotless and clean[vi].  Another version says it was named after a white spot on the roof of the log building that was the first restaurant.[vii]

It has remained largely a BC based company with the exception of a few years when Nat Bailey sold it to the General Foods Corporation in 1968.  But in 1982 it was bought by BC native Peter Toigo and is now a part of Shanto Holdings group of businesses which is now owned by his sons[viii].

A drive-in is different from a drive-through.  At a drive-in, customers parked their vehicles and were served by staff (often called car hops) who walked (or sometimes roller skated) out to the car to take orders. They returned with food on a tray that either sat inside the car from window to window like the White Spot version or hooked on the side of the window. Diners signaled they wanted service by turning on their headlights. The heyday of the drive-in was the 1950s and 1960s with the rise of the automobile culture and the uniqueness of the experience of eating in a parked car.  Drive-throughs soon gained prominence, perhaps a sign of a more hectic pace of living where people eat as the car is moving.

Getting back to the “triple O” sauce. There seems to be common agreement that the OOO has nothing to do with the sauce but was derived from the “OOO” abbreviation used by car hops back in the days when drive-ins were popular. The carhops would circle the words hamburger, relish and mayonnaise when taking an order for the trademark burger. Gradually triple O began to refer to lots of everything. In an interview with Kim Pemberton f the Vancouver Sun, current company president, Warren Erhart said that even he didn’t know the secret.  Only six people know the Triple “O” recipe and they had to sign confidentiality agreements. It’s so top secret the two parts of the sauce are prepared in two different sites then blended by the folks in the know[ix]. I once tried to make it with Kraft Sandwich Spread mixed with mayonnaise and relish but that wasn’t right.  With barbeque season almost upon us, have any of you tried to replicate this iconic hamburger garnish?

[iii] Source https://www.whitespot.ca/your-stories  Also includes many other personal stories of experiences at the White Spot.