Previous Next
TASTE Canada Cookbook Awards- BC Cooks and Authors

TASTE Canada is a national not-for-profit that aims to inspire readers to discover delicious recipes and diverse food stories written from a Canadian perspective.[i]  Each year they host the Canada’s Cookbook Awards: A champion of Canadian cookbook authors. Awards are given in the following categories:

Since its inception in 2000, British Columbians have been making food history.  Here is a list of all the past winners about the province of British Columbia and/or by BC authors[ii]:

For the 2019 TASTE awards two Cookbooks  with BC connections are on the Shortlist: 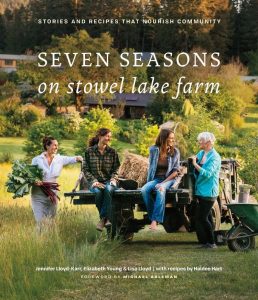 Told through the voices of four women at the heart of a stunning sustainable organic farm located on Salt Spring Island in British Columbia, Seven Seasons on Stowel Lake Farm is a multi-layered, evocative exploration of life on a sustainable organic farm. From harvest dinners to Thursday work parties, looking after free-range children to handling the summer hay bailing, planting early seeds to celebrating the New Year, each experience offers a meaningful celebration of people working and living together on the land.

Perched between the majestic old-growth forests of Tofino and the vast expanse of the Pacific Ocean, is the Wickaninnish Inn. Memorable recipes from the restaurant are coupled with signature recipes from current and former chefs combine cutting edge techniques with fresh, seasonal ingredients, to create a distinctly contemporary, west coast cookbook.

The winners will be announced at the 2019 Taste Canada Awards Gala held at the historic Fairmont Royal York in Toronto on Sun, Oct 27, 2019.