A Rationale For Bringing a Historical Perspective into Food Studies

A Rationale For Bringing a Historical Perspective into Food Studies

The need for a rationale for bringing an historical perspective into food studies becomes clear through examination of food studies curriculum documents for secondary schools in Canada. Examination of  these curricula reveals that emphasis is seldom put on understanding the history of food production, preparation, or consumption. The curriculum and education could be described as ahistorical, that is, not particularly concerned with or related to history, historical development, or tradition. Much curriculum content in home economics education focuses on the present and topics are rarely contextualized with a temporal dimension. For example, in the British Columbia 2007 official curriculum document for food studies, students are to “use” Eating well with Canada’s Food Guide in various ways with increasing sophistication through the grades. No mention is made of the history of food guides, why they were developed, how they were developed, how they have changed over time, issues related to the current guide or how food guides might be shaped in the future. 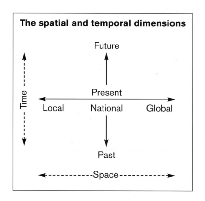 Fig. 1. The spatial and temporal dimensions of curriculum (Hicks, 2006).

Hicks’ figure is a reminder that curriculum contains both a spatial and temporal dimension. The past and future are frequently absent from the temporal dimension of the curriculum and the local and global are often missing elements on the spatial dimension. This could be attributed to what has been described as presentism, an uncritical adherence to present-day attitudes, especially the tendency to interpret past events in terms of modern values and concepts (e.g., Hunt, 2002). This is not a new term. Ralph Tyler (1949) used it over a half a century ago when he wrote that determining curriculum content only from children’s interests and everyday lives was a “cult of ‘presentism’” (p. 18). Lortie (1975) expanded Tyler’s work and proposedthree interwoven orientations, individualism, conservatism and presentism, made schools resistant to change, claiming that this leads to short-term thinking and maintenance of the status quo in education and attitudes of temporal superiority. Hargreaves and Shirley (2009) found that presentism is very much a part of today’s schools, and describe addictive presentism, a new form of presentism that , the addiction to short-term gimmicky fixes, “instant strategies that enhance effectiveness in what already exists rather than reflecting on and reforming what already exists” (p. 2516). For those who advocate moving beyond presentism (e.g., Hargreaves & Shirley, 2009; Nahachewsky & Johnston, 2009) the curriculum task is to “recover memory and history in ways that allow people [and we add, students] to re-enter politically the public sphere in privately meaningful and ethically committed ways” (Pinar, 2004, pp. 240–241).

We view the historical as a key component of the temporal dimension in education (Pike & Selby, 1988, Hicks, 2006) allowing students to see that the past, present and future are in a dynamic relationship rather than a linear progression and to understand that in order to take informed action one must understand how social conditions of the present have a past. Including a historical perspective in our teaching should be seen as something that could lead to a new understanding of the present and the future. History shapes us. It makes us who we are. If we think and act and feel in certain ways rather than others, it’s because of our history. Without history we have only a part of the story. History shows us the historical roots of what we take for granted, illuminating decisions that have been made by somebody somewhere in some kind of context. This way of knowing can be the source of new insights that can shape the future. For example, in Much Depends on Dinner, Margaret Visser (1986) took a simple meal of nine ingredients and then researched each ingredient. What she found surprised her:

These nine foods among them require the consideration of mighty problems which especially afflict the modern world. Some of these are: the dangers and triumph of crop uniformity and genetic engineering; the salting and pollution of the desperately precious fertile areas of the earth; the destruction of cultural traditions and the replacement of it by – what else? – replaceability; democratization being turned into an enemy of culinary excellence; farm mechanization and the loss of human livelihoods, cheap meat versus animal rights; food irradiation, additives, antibiotics, herbicides and pesticides, and the angry distrust they can arouse in us. (p.22 )

We are particularly interested in how food takes us back in time and links us to the food choices, recipes and rituals of previous generations. These links can inform students of historical, cultural, social, economic and political connections related to food and everyday life, and enable them to make informed, educated decisions related to their health, food purchases, family life, the environment and the common good.

Therefore we submit that including a historical perspective in food studies curriculum and pedagogy is a necessary requirement in developing:

What historical content could be infused in Food Studies Curriculum?

Almost every topic that is included in food studies curriculum guides could be contextualized with historical content. The renowned U.S. food studies scholar, Rachel Laudan (n.d.) suggests that there are at least six “histories” that could be part of food studies:

What teaching strategies could be used to infuse a historical perspective in Food Studies Curriculum?

Teachers can begin the process of infusing historical content into every lesson by asking themselves “How have I set the context for this lesson in terms of time and space?. In the previously mentioned food guide example we suggested discussing with students why food guides were developed, how they were developed, how they have changed over time, issues related to the current guide or how food guides might be shaped in the future. In teaching a specific unit on preservation, historical methods of drying, salting, fermenting and winter storage in root cellars could be introduced. A discussion of the taken-for-granted concept of modern refrigeration could lead to exploring food choices that are non-perishable and how to obtain essential vitamins and minerals when fresh fruits and vegetables are not readily available. When teaching a specific technique, for example beating with an electric mixer, students could speculate on how this was done before electricity. The mechanical workings of early egg beaters could be examined; First Nations traditions of whipping soapberries into foam using wads of grass or fingers could be explored (see Dehart, 1989). With the current resurgence in grinding one’s own grains, the history of early flour and grist mills could be researched with emphasis on use of local staple foods.

The emphasis in today’s schools on inquiry learning provides a window to infusing a historical perspective. Students can be encouraged to use various forms of historical inquiry. Lowenthal (1985) suggests that the past can be known through memory, history and relics. Laudan (n.d.) adds chronology and legend.

Memory – A tribute to something that we believe we have lost, situating people and events into historical context. Students could interview family members or elders in the community and collect food memories (e.g., of various eras, of immigrant experiences, of traditional festive and celebratory foods, outdoor experiences with hunting, fishing and mushroom and berry picking expeditions, to name a few.

History – Descriptions of an event by someone other than an eyewitness. Student inquiry could involve the investigation of how food and agriculture affected settlements, how meat was obtained and preserved, how was food safety handled, smokehouses and slaughterhouses, when and how did the microwave become standard kitchen equipment, the etiquette (table manners) of the times of a particular time-period, the rise of farmers’ markets and school gardens. They could be encouraged to compare then and now and speculate on the future.

Relics and Artifacts – these can include letters and diaries, cookbooks, newspaper articles, memoirs and autobiographies,pictures and photographs, cooking utensils and implements, recipe collections and so on. These items can assist in imagining what it was like back in those days and how daily life had changed. Students could trace a recipe to its source, compare and contrast recipes for the same food product, note evidence of hybridization or creolization, try the recipe in old and new versions and report their findings. They could find a piece of old kitchen equipment and learn how to use it (e.g. try baking/cooking on a wood-burning stove or using a sausage grinder). A visit to the museum and archives is a rich source of relics and artifacts.
Chronology – a list of events in the order in which they occurred. (See for example, http://www.foodtimeline.org/). A common strategy in historical accounts is to put the data in chronological order, a “ what happened when” approach. Timelines assist students in putting curriculum in perspective. They provide a visual tool for examining a topic over a period of time as students compact a great deal of complex information. Students learn to prioritize and summarize information. By creating a timeline of significant events they can be placed in the context of the prevailing socio/economic and political conditions of the period. This adds “what else happened when” so that implications, antecedents, and consequences, become part of the analysis and interpretation. Generally the historian is trying to tease out the “why” of the event or activity. Students could compare one particular recipe in several cookbooks over a number of years and trace the development of certain food production and preparation technologies, processes or ingredients.

Legend – A story that supports the beliefs of lots of people. Students could investigate the stories behind common cultural practices such as serving turkey at Christmas, eating chocolate on Valentine’s Day and making pumpkin pie on Thanksgiving, or the stories behind certain practices or use of ingredients.

Awareness of the history and background of the foods we prepare and eat enriches and expands educational value for students and teachers. Learning about historical influences and making connections between and among food customs provides an opportunity to break down walls between “them” and “us” whether between cultures or intergenerationally. We are all human; we all have to eat. We have all developed particular food customs that reflect our economic, social, cultural and historical backgrounds. Mark Kurlansky (2007) argues that history needs food studies when he says,

if future historians want to look at what life was like in the early 21st century – the technological and information revolutions, the blessings and dangers of globalization, the challenges to the survival of the healthy planet – they would do well to look at our food. (p. 43)

But the reverse is equally salient – food studies needs history. Given the importance of food to human life, and its intimate connection to the way we live and how we use the world, we propose that more, not less food history needs to be infused in all aspects of food studies education.

Hicks, D. (2006) Lessons for the future: The missing dimension in education, Victoria BC: Trafford Publishing

Lowenthal, D. (1985). The past is a foreign country. Cambridge,UK: Cambridge University Press.

Promise of Place. (n.d.). What is place-based education?[Website]. Retrieved from http://www.promiseofplace.org/what_is_pbe

Visser, M. (1986). Much depends on dinner: The extraordinary history and mythology, allure and obsessions, perils and taboos, of an ordinary meal. Toronto, ON: McClelland & Stewart.